The following section introduces and defines key concepts used throughout the report, as many of these have varying definitions depending on their policy applications.

According to UN Women, gender refers to attributes and opportunities which are socially constructed and learned through socialisation.[6] This definition acknowledges that differences in women’s and men’s positions in society are influenced by time, geographic location, marital status, and norms (i.e. laws, policies, and cultures), which can be used as a lens to analyse differences between women and men. Gender norms are fluid, and some social and political contexts recognise gender identities outside of this binary construction.[7] The report seeks to understand how gender affects women’s position in company ownership globally.

In contrast, sex refers to the different biological and physiological characteristics of males and females, such as reproductive organs, chromosomes, hormones, etc.[8] Sex is generally expressed in the binary female or male, and is often used in gender statistics[9] to compare the differences in lived experiences between these two groups; for example, in data collected to evaluate progress on the SDGs. Despite the limitations of the term “sex” as compared to “gender” in reflecting power dynamics in a given society, this report uses it to follow the norm of referring to sex-disaggregated data and sex data of individuals.

A direct link between BOT and gender equality can be seen through the use and collection of sex data of beneficial owners of companies for gender equality purposes. Sex-disaggregated data is often perceived as a necessary first step in any gender-sensitive approach to analysing the impact of gender on individuals in a given society. Sex-disaggregated data is described as any data on individuals broken down by sex.[10] Data on an individual’s biological sex or gender – or sex data – is a prerequisite for this. Experts agree that gender equality cannot be achieved without sex-disaggregated data providing the necessary statistics and benchmarks.[11] However, having sex-disaggregated data alone merely provides the starting point for gender-sensitive approaches to analysing the effects of gender in society.[12] In BOT, gendered dynamics may also impact how beneficial owners are reported – for example, women may be more likely to be falsely disclosed as beneficial owners where in fact they are proxies or nominees in contexts where they have a less advantaged economic or social position – which reduces data quality and reliability.

Where gender-sensitive approaches analyse the impact of gender and how it affects women and men differently,[13] gender-responsive policies seek to mitigate these effects.[14] They do so through a holistic approach that identifies and accounts for how actions and omissions in policy design might affect people differently.[15] These can either be policies which directly aim to promote gender equality, or policies with other aims which nevertheless take into account how a society’s gender dynamics create different needs and impacts.

A beneficial owner of a company is the natural person at the end of the company’s ownership chain with the right to some share of the income or assets (referred to as “ownership”) of that company, or the right to direct or influence the company’s activities (referred to as “control”). As companies can legally own or control other companies, beneficial ownership has evolved as a concept to describe the individuals who ultimately own and control companies. In contrast, legal ownership describes those who directly own a company, which can be, for instance, an individual or another company. However, a company can never be the ultimate controller because that entity’s ownership is controlled by a natural person, the beneficial owner.[16] Because BO describes the ultimate owner or controller, a person acting on another person’s behalf as a nominal owner and who, in their name, manages the rights in the interest of the other individual, can never be a beneficial owner.[17] 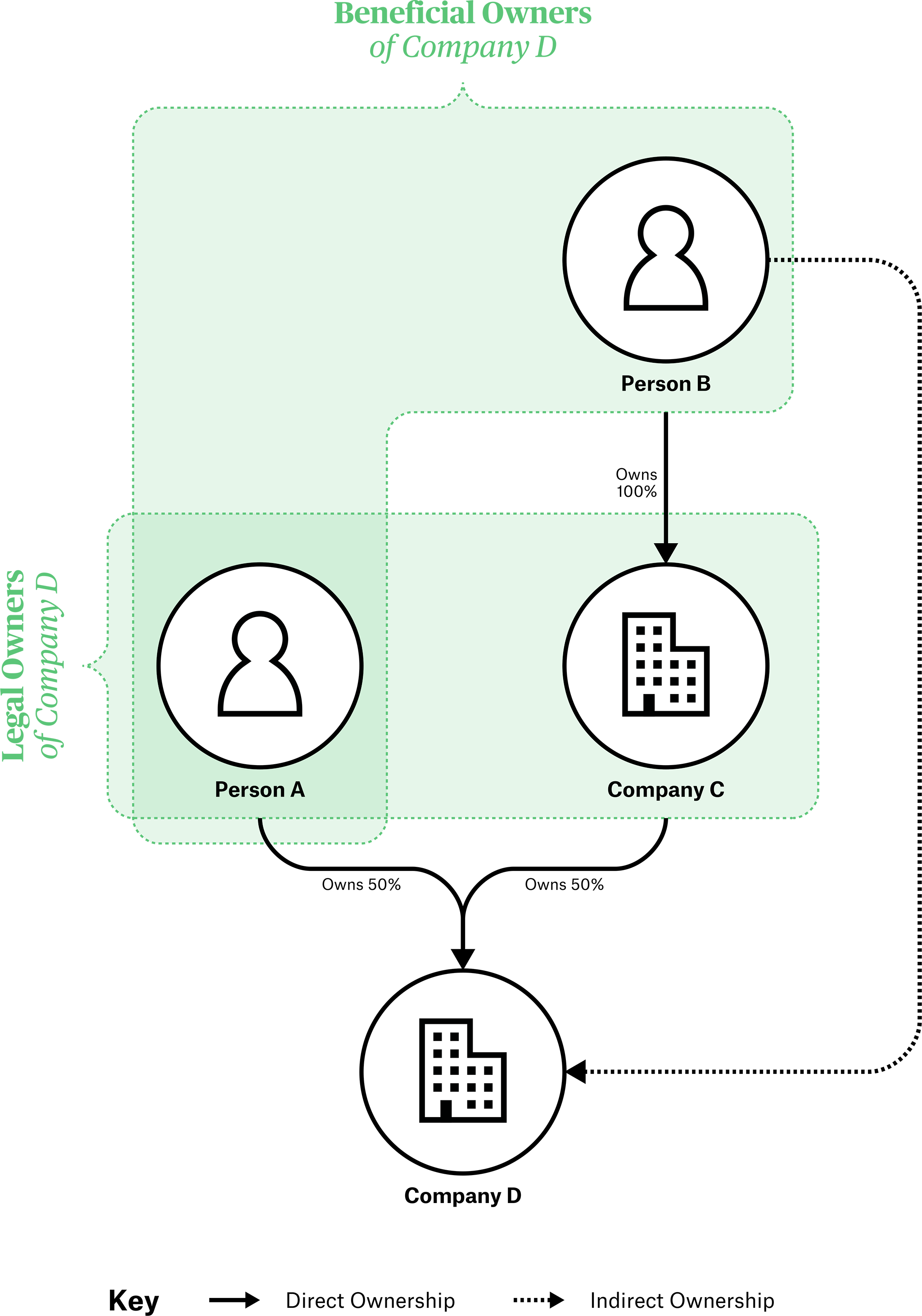 Beneficial ownership transparency constitutes a set of reforms that enable governments to centrally collect BO information from legal entities as disclosures. Governments will often verify this data and subsequently make (some of) it available to a range of actors who use it to achieve various policy goals. Since 2015, over 110 jurisdictions have adopted laws requiring companies, legal entities, and arrangements (e.g. trusts) to disclose information about their beneficial owners, and over 100 of these jurisdictions have committed to making this information available to the public.[18] In BOT regimes, companies make declarations about their beneficial owners as part of disclosures to government. For BO registers to have maximum impact, users and authorities need assurance that the information collected broadly reflects the true and up-to-date reality of who ultimately owns and controls a company.[19] They may use mechanisms to verify BO information, such as requiring the submission of supporting documentation. Whilst governments often attempt to verify the accuracy of these statements, the declarations are claims of ownership made about companies at specific points in time, rather than a direct reflection of reality.