Sanctions are part of diplomatic efforts to protect national security interests and international law, and defend against threats to international peace and security. There are different types of sanctions, but the main type that is relevant to BOT is economic and financial sanctions, which can be imposed on nations, organisations, or individuals, and are often associated with organised crime, terrorism, hostile states, or proliferation financing.[i] The use of sanctions can involve seizing or freezing assets, and banning trade and financial transactions with the target of the sanctions. Violating sanctions is often a criminal offence. There are international sanctions lists, such as the United Nations Security Council Consolidated List, the World Bank Ineligible Firms and Individuals List, the Interpol Wanted List, and the EU Consolidated List. Additionally, many countries maintain their own sanctions list, for example, the US Office of Foreign Assets Control (OFAC) Specially Designated Nationals List and the UK HM Treasury Financial Sanctions List. National sanctions lists are a predominantly Western phenomenon, but other countries, such as China, also have sanctions lists.[45]

Checking against sanctions lists is a common part of onboarding new customers and ongoing due diligence by regulated entities under AML/CFT regulations. Nevertheless, anonymously owned shell companies – including entities in the sanctioning jurisdiction – can be, and are frequently, used to evade sanctions (see, for example, Box 3 and Box 4). Arguably, these cases could be prevented if better information about the ownership of companies was widely available.

Iranian Oil Company (U.K.) Limited (IOC) is an oil and gas company that holds a licence in the UK for a 50% interest in the Rhum gas field in the North Sea.[46] Following new US sanctions against Iran in 2018, OFAC required the Iranian government’s shareholding to be transferred into a trust so that Iran could not derive any benefit or exercise any control from the Rhum gas field while the US sanctions are in place.[47]

On 2 November 2018, the UK’s BO register showed the cessation of the Islamic Republic of Iran as the beneficial owner of IOC, along with the termination of three Iranian directors. On the same date, the register shows Jersey-registered FCM Limited incorrectly listed as the new beneficial owner.[j], [48] Filed annual accounts show that, with effect from 2 November 2018, all of IOC’s shares were transferred to the Bluebell Purpose Trust, with FCM Limited as corporate trustee.[49] From December 2020, the UK register lists the non-executive chair of FCM Limited as the beneficial owner. That same person is also the beneficial owner of a management company set up to manage IOC’s interest in the gas field.[50] This example shows how BO and company data can be used to monitor and enforce sanctions. It also shows the challenges opaque structures such as trusts pose in ensuring sanctions compliance, as the conditions of the trust are unknown. 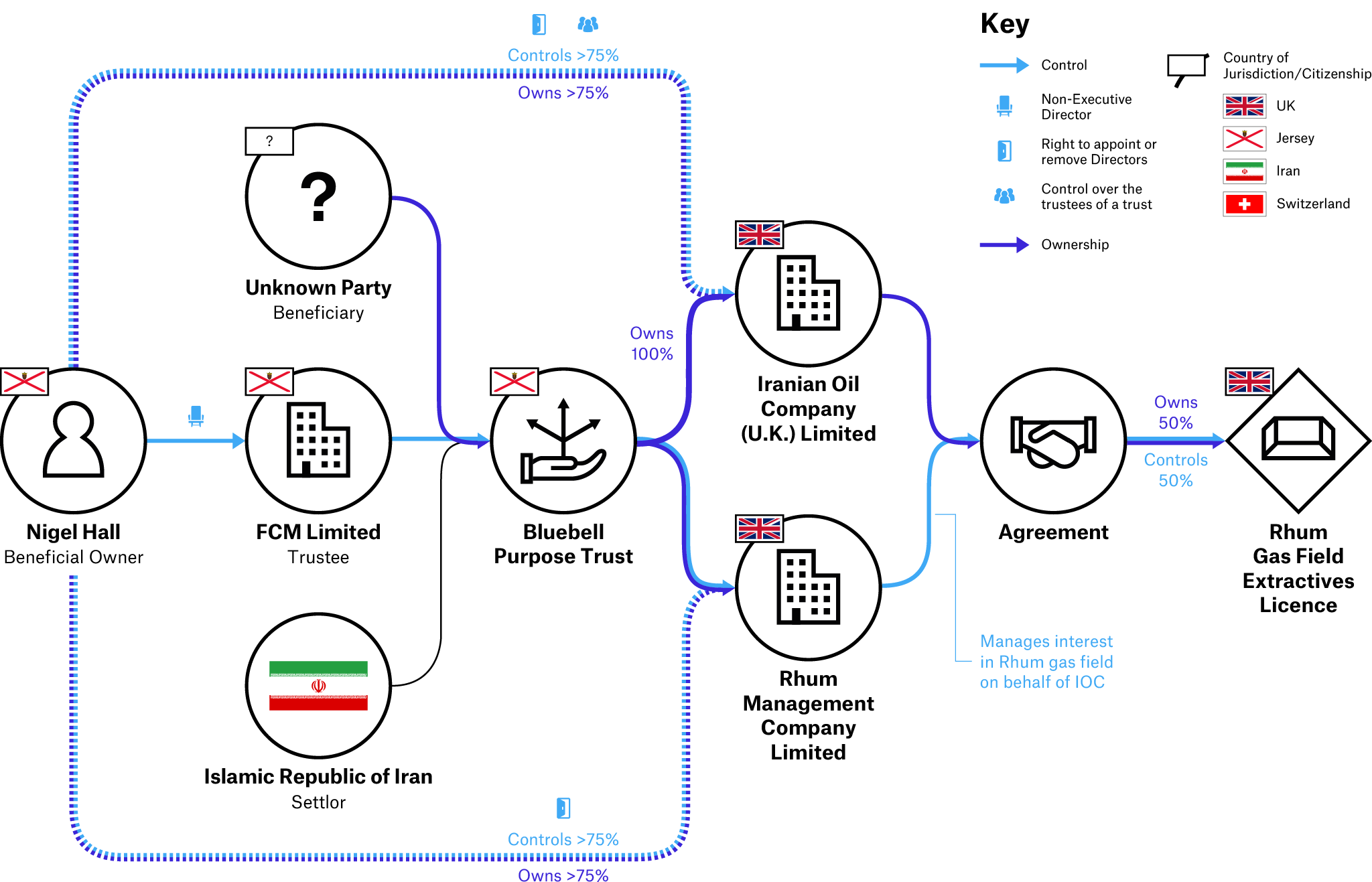 Sources: UK Companies House and US Securities and Exchange Commission.

Box 3: Evasion of US sanctions against Iran through shell companies

The US has had sanctions in place against the Islamic Republic of Iran – which it deems a threat to its national security – since 1979. In March 2021, charges against 10 Iranian nationals included the use of shell companies to disguise transactions to evade American sanctions against Iran. The individuals are charged with disguising more than USD 300 million worth of transactions over the course of nearly 20 years – including the purchase of two USD 25 million oil tankers – on Iran’s behalf through front companies in a number of jurisdictions, including in the US itself. As part of the scheme, “the defendants allegedly created and used more than 70 front companies, money service businesses and exchange houses”. In 2016, one of the accused allegedly transferred USD 66,766 into the US on Iran’s behalf via a Santa Monica-based company with a bank account held at Wells Fargo & Co.[51]

The role of beneficial ownership transparency

BO information can be critical for successful investigations into sanctions violations. Research shows that networks set up to evade US sanctions against North Korea use several layers of entities to obscure connections to the sanctioned country, which reduces “the scrutiny of their financial transactions in the international financial system […] North Korean front and shell companies often share patterns such as co-locating business addresses and beneficial owners”, as was the case for multiple implicated UK companies.[52] Bulk analysis of BO information can facilitate the identification of companies sharing beneficial owners and addresses, which can aid (proactive) investigations into the violations and evasion of sanctions. In addition to financial flows, economic and financial sanctions often also cover non-financial assets. BO data can also be used by different government agencies in their due diligence processes to prevent sanctions evasion through the specific assets they issue licences for, for instance aircraft (see Box 4) or vessels.[53] Given the range of government agencies potentially involved, governments are recommended to collect and verify the information centrally. It is also critical for BO disclosure regimes to capture sufficient detail about state ownership, as recommended by the Open Ownership Principles (OO Principles),[54] as state involvement may not be immediately obvious.[55]

A 2020 study by the US Government Accountability Office (GAO) found that the government body that registers civilian aircrafts, the Federal Aviation Administration (FAA), “generally relies on self-certification of registrants’ eligibility and does not verify key information”.[56] It concluded that the system is “vulnerable to fraud and abuse when applicants register aircraft using opaque ownership structures that afford limited transparency into who is the actual beneficial owner”. The body that manages the US sanctions list, OFAC, can freeze assets, including aircraft, under US jurisdiction.

In a case study, the GAO details how, in 2017, the OFAC sanctioned the Executive Vice President of Venezuela for his role in international drug trafficking. According to the OFAC, the Venezuelan government official facilitated drug shipments to Mexico and the US, by using a frontman to launder proceeds and purchase assets. According to the OFAC, in addition to a network of international companies, this frontman owned or controlled five US companies. One of these companies, a limited liability company (LLC), registered an aircraft with the FAA using a trust to meet US citizenship requirements for aircraft ownership. Unrelated to the designation, the FAA deregistered the aircraft. The FAA subsequently issued a dealer certificate to the LLC after the sanctions designation, as it was unaware the designation had been made.[57]

Specifically, a challenge for the FAA is that the ownership data on individuals and entities “are stored in files that cannot be readily analyzed due to system limitations”‘.[58] Making centrally collected and verified BO information available as structured, machine-readable data could help facilitate automated red-flag checks for aircraft ownership. Besides sanctions evasion, aircraft ownership by the wrong individuals can also pose a more direct physical safety concern.