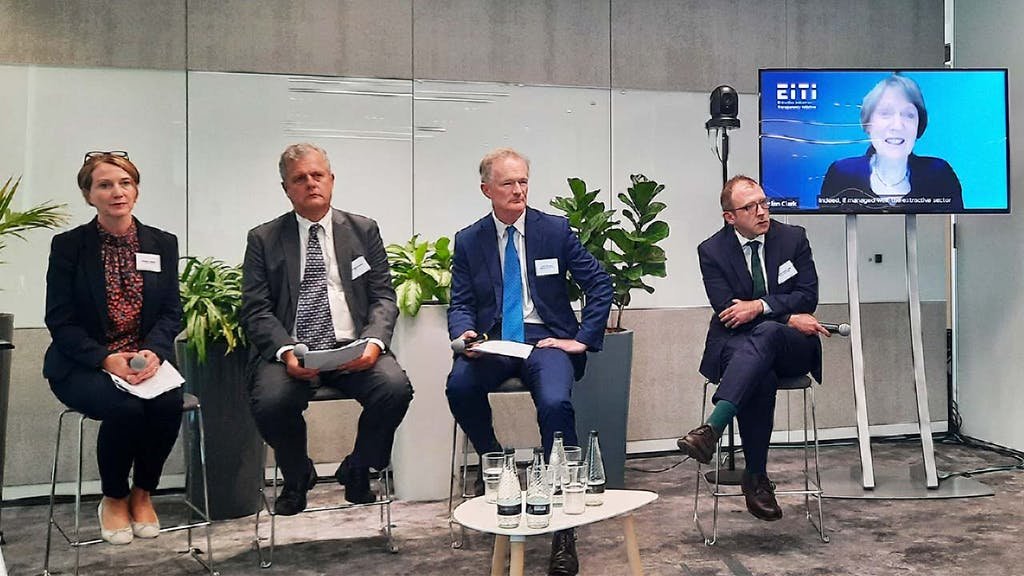 The UK plays host to one of the largest financial services sectors on the planet. It is also one of a growing number of countries which requires all businesses to name the individuals who ultimately own or control them. London was therefore a fitting venue for a unique gathering of representatives from extractive, accounting and professional service companies, civil society organisations and governments. The purpose of the forum was to commit to further progress on the publication and use of beneficial ownership data.

“The bus is leaving the station, you might as well be on it,” declared the UK Prime Minister’s anti-corruption champion, John Penrose MP, outlining progress towards transparency by sector and by country. “Starting with extractives, it is off to a brilliant beginning.”

On 7 September, five mining companies, Anglo American, BHP, Glencore, Newmont and Rio Tinto, announced a series of commitments on beneficial ownership transparency. This group of companies, dubbed “the royalty of mining” by John Penrose, were joined by the energy company Repsol in issuing the declaration, which goes beyond existing commitments made by the signatories as EITI supporting companies. We urge other EITI supporting companies to join this group in advancing beneficial ownership transparency.

Over 110 countries have now committed to the publication of beneficial ownership information for companies in one or more sectors. Speakers at the forum made the point that increasing the number of registers in existence creates a “network effect,” whereby companies who wish to undertake due diligence on business partners can readily access information on their ownership.

For mining companies such as BHP, it makes sense to support beneficial ownership transparency. “Fighting corruption in our industry has never been so important,” said Tim Robinson, who oversees global compliance and anti-corruption for BHP. He noted that in a scenario suggested by the Paris Agreement, demand for copper may double and demand for nickel may quadruple in the next 30 years. With these primary resources largely located in countries with weak governance structures, knowing who owns or benefits from the companies holding rights to these resources will act as a major disincentive to corruption, increase public trust, and open resources to scrutiny. With over 9,000 suppliers, BHP will experience a major uplift in its ability to conduct supplier due diligence thanks to beneficial ownership transparency, and increase its understanding of its business partners.

Deloitte’s Risk and Financial Advisory Principal, Don Fancher, underscored the power of technology as an aide to fighting financial crime. He highlighted how larger, open data sets are needed to detect patterns of fraudulent behaviour and develop proactive solutions to combat financial crime. He further highlighted the value of trust as a ‘currency’ which is essential for professional services companies, and how knowing the beneficial owners of companies can ensure that potential risks in taking on clients are identified.

Nigeria has been an early mover in recognising the importance of publishing data on the beneficial owners of companies. According to Prince Clem Agba, Minister of State, Budget and National Planning in Nigeria, while Nigerian law mandates the Corporate Affairs Commission to collect and publish information on the beneficial owners of companies, Nigeria’s experience is that many companies still need to be convinced of its significance. Support will be provided to improve the data registry in Nigeria through Opening Extractives, a global programme delivered by the EITI and Open Ownership that will transform the availability and use of beneficial ownership information. Nigeria is one of approximately 12 countries that will benefit from the legal and technical support of Opening Extractives, which was launched at the forum.

A G7 statement released in the week of the forum stress the importance of beneficial ownership transparency and welcome support for reform by multilateral development banks. The statement endorse the view that beneficial ownership transparency throughout the supply chain can help to mitigate corruption risks. They further encourage steps by development banks to promote best practice.