"How did a beneficial owner's disclosed interests in a company change during the course of 2021? Were those changes reported within the legally-required timeframe?"

When it comes to investigating the beneficial ownership of particular entities, or designing red-flagging systems, it is critical to find out who knew what, and when. The ‘when’, has been covered with feature two above. The ‘who’ is just as important: analysts need to know the company or individual that declared the information was accurate.

Companies, individuals and agents may appear in the declaration ledgers of different companies and at different points in time. Analysts need to be able to compare what was disclosed in one place at a given time with what was disclosed elsewhere. Imagine, for instance, that Company C is disclosed as an intermediary for a beneficial owner in declarations from both Company A and Company B. 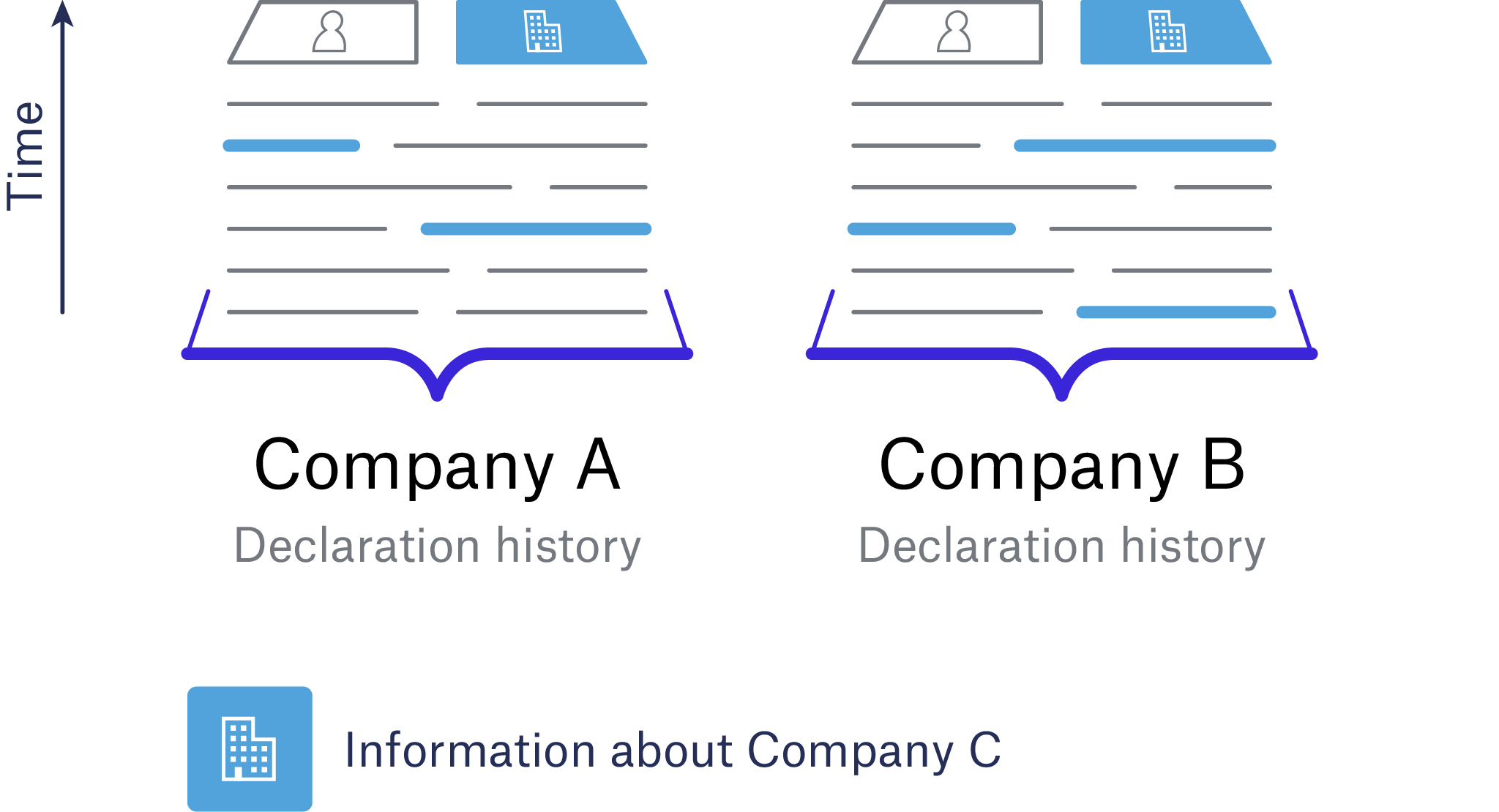 Figure 3. Who knew what, and when

It is known that Company C’s name and ownership changed over a six-month period, and therefore this impacted the beneficial ownership of Company A and Company B. In an investigation, it could be crucial to know when these changes were disclosed, and which of the related companies disclosed them.

Understanding the motivation for updates

To make sense of competing statements about the same individual or entity, it helps to know what has triggered an information update. Of course, the existence of a new beneficial owner or similar changes to a real world situation might trigger updated information to be disclosed, then added to the ledger. However there are other types of motivations for updating information which include:

Only the first of these examples describes a mistake by the declaring person at the point of data input. The other two cases describe mistakes at the data storage and publication stages.

Consider the above examples and the huge range of reasons that an element of beneficial ownership information might change. It becomes apparent that not all updates should be part of the ledger, and some updates may exist to correct the historical record.

We would expect in case (1) that the inaccurate information would remain part of the historical record, and the update (and the motivation for it) would be part of the ledger. In case (2), the error came from the system’s data handling. Here it would be acceptable to correct the historic record transparently (publishing the motivation for the correction), so that if the erroneous and corrected data are compared, it is clear which is which.

Case (3) is different. Here information has been published to the ledger which should have been kept private. Historic records in the ledger need to be redacted in a way that does not draw attention to the redaction: the motivation for the update need not be made apparent.

Of course, declaration systems should be designed so that the motivation for updates is also recorded internally. But, as we have seen, not all changes should be made to the published beneficial ownership ledger in the same way.

These considerations are all informing how we improve BODS. The data schema and the guidance will provide a strong steer as to how ledgers of beneficial ownership look when produced as JSON data conformant with BODS. Questions like “Were […] changes reported within the legally-required timeframe?” can then be translated into queries over historical datasets.