The UK is one of the few countries that has a legal mechanism to target illicit enrichment – the Unexplained Wealth Order (UWO) – which can enable the seizure of unexplained wealth in the UK.[26] In 2018, evidence from open BO data played a key role in enabling the UK National Crime Agency (NCA) to issue the first UWO, which was against a politically exposed person (PEP) from Azerbaijan who owned real estate in the UK.

Jahangir Hajiyev, former chairman of the state-owned International Bank of Azerbaijan, was jailed in 2016 for 15 years for fraud, embezzlement, and misappropriation of public funds. The court found he had taken an estimated USD 9 billion out of the country, equivalent to 25% of Azerbaijan’s gross domestic product (GDP).[27] UK authorities investigated luxury London properties and investments that they suspected were purchased with laundered funds.

One such investment was the purchase of the exclusive Mill Ride Golf Club in Berkshire, which Jahangir Hajiyev’s wife, Zamira Hajiyeva, allegedly purchased for GBP 10.5 million in 2013.[28] The ownership of the golf club involved both a UK company, MRGC Ltd, and an entity incorporated in Guernsey – a jurisdiction that does not yet publish beneficial ownership information. However, the UK’s public BO register was used to show that Zamira Hajiyeva had been a beneficial owner of MRGC Ltd for a single day in August 2016.[29] Her name was subsequently removed.

Transparency International (TI), which analyses UK PSC data to identify suspicious patterns that may indicate corruption, highlighted the value of open BO data in cases like this. Ben Cowdock, TI’s Investigations Lead, said: “In a closed system, it would have been incredibly lucky to find that single day. But in the UK, where beneficial ownership data is open, on the public record, a search can identify the link.”

"In a closed system, it would have been incredibly lucky to find that single day. But in the UK, where beneficial ownership data is open, on the public record, a search can identify the link" - Ben Cowdock, Investigations Lead, Transparency International 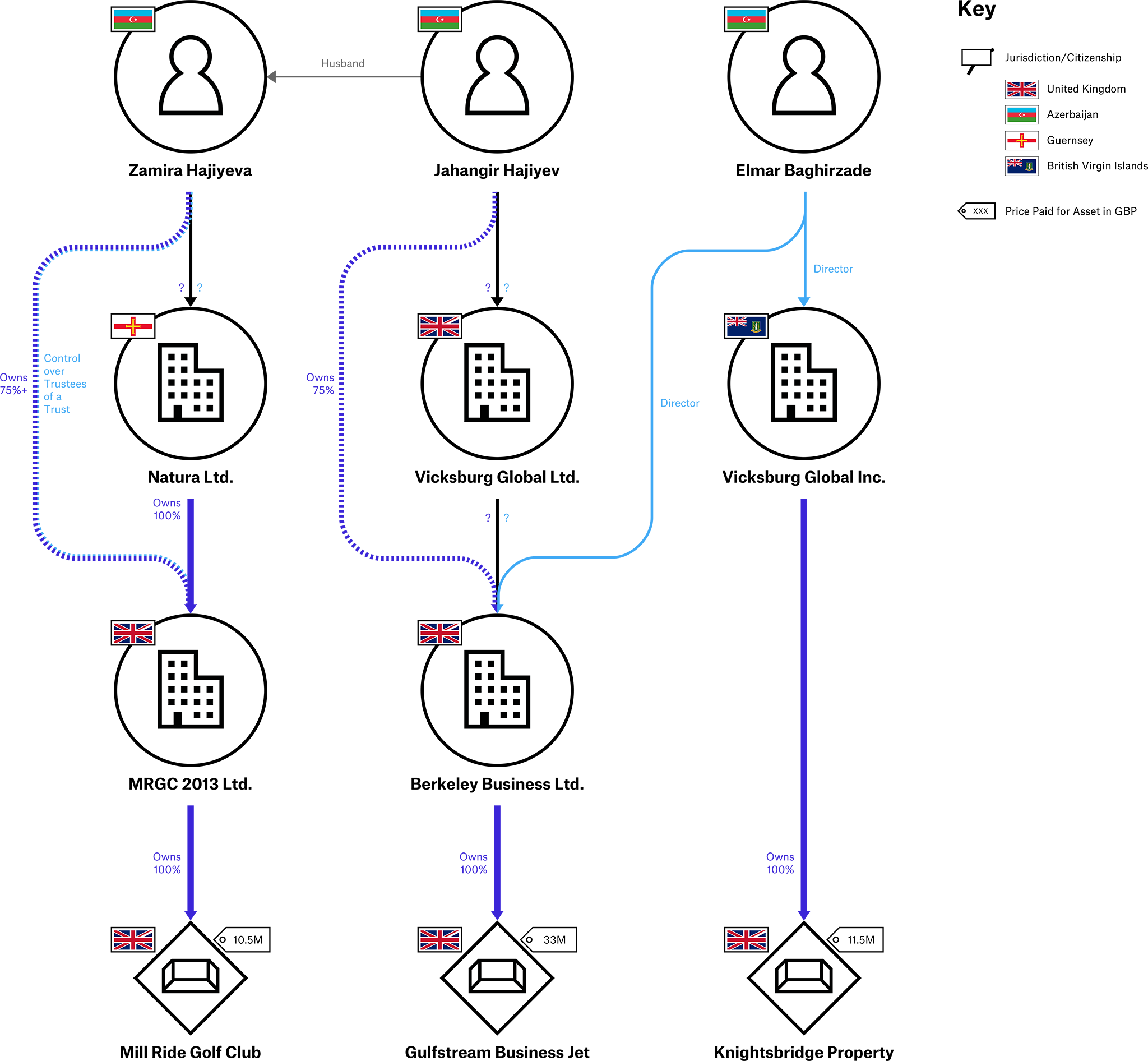 Sources: This diagram has been compiled from the following public sources to illustrate the complexity in understanding ownership structures based on limited publicly available information: Open Ownership Register; Companies House register; BBC. The information contained in this diagram is compiled on a best efforts basis and is not exhaustive or complete. Aspects of the ownership structure have been left out where the information is not available, not relevant to illustrate the story, or challenging to visually represent. The diagram covers multiple time periods, rather than a snapshot. Not all of the entities and officers shown are still active.

Next page: Case Study: Deterring the use of UK companies to facilitate corruption